Favor Delivery has captivated the Texas market with their fast and friendly service that delivers anything – from lunch to items on your shopping list – in under an hour. As this Austin-based company continues growing at breakneck speed, their creative, marketing and content teams are helping to fuel this success with state-wide campaigns and restaurant partnerships.

As part of the photography team at Favor, Nicolai spearheads the creation and management of visual content for marketing campaigns, restaurant partners and social media. To help his team keep pace with the demands of a quickly-growing industry, Nicolai championed Favor’s move to a simple and scalable digital asset management (DAM) solution.

The quickly-growing company needed to simplify the way they stored and shared visual assets.

With Canto streamlining workflows, Favor’s content has become a special ingredient in the company’s success.

Whether the marketing team is launching digital and real-world campaigns, the content team is updating their app with beautifully styled food photos or the sales team is working with restaurant partners, the creative team provides the compelling visuals that make all of this possible.

Ultimately, these visuals capture the attention of customers, make the user experience more enjoyable and empower the sales team, which all contributes to Favor’s continued success.

“Our visuals are going out in emails, social media, billboards, ads, flyers – all of the content that we send out,” says Nicolai. “We run digital ads every day and on any given week, we’re working on seven to ten marketing campaigns. And that’s just the content that’s going to our customers – there’s an equal focus on imagery and visuals that goes out to our community of Favor runners.” 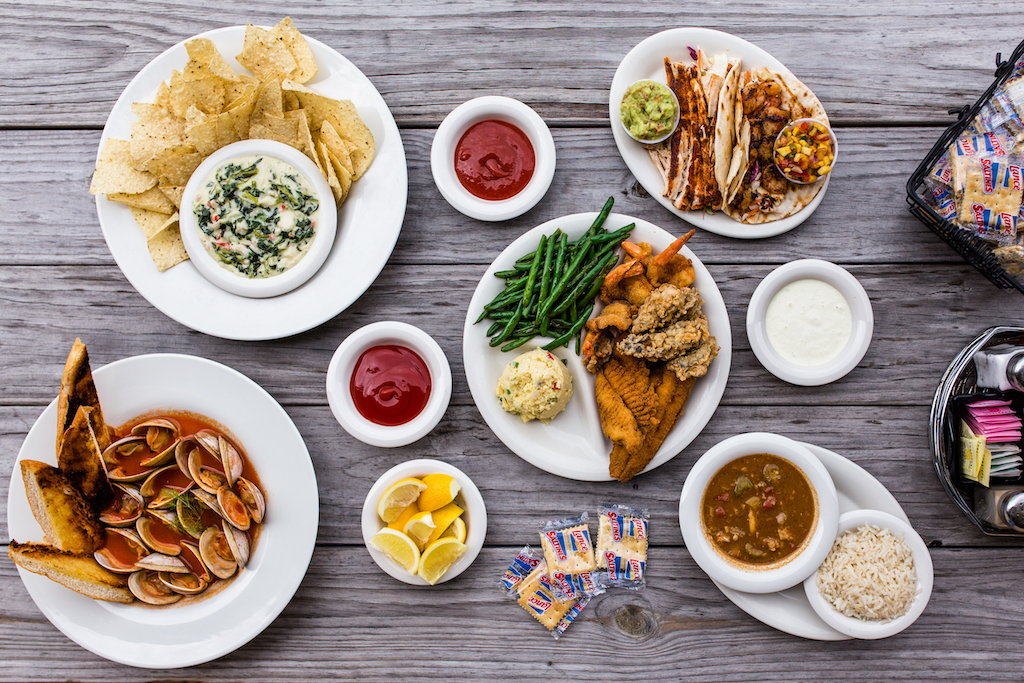 Because Favor pushes out so much visual content, it’s important for Nicolai to have a streamlined way to manage all of their photography – but their previous DAM solution wasn’t cutting it. Nicolai began searching for a DAM that simplifies the team’s work rather than adding unnecessary complexity.

“We were already using a DAM, but it was very slow, bloated with features I didn’t like and pretty expensive. I started shopping around and tried out three or four different DAM solutions,” says Nicolai.

In the end, Nicolai and his team were won over by Canto’s folder structure, simplicity and intuitive design.

“Canto was the solution that checked all our boxes without being too complex,” says Nicolai. “We especially liked the folder structure and how easy it is to use.”

Canto does everything we need it to do easily and efficiently. It’s also intuitive to use; most people can just open it up and figure out how it works.

Throughout all of the changes the company has experienced in the past few years, the Favor team has been able to rely on Canto. Favor began using Canto three years ago, when the company was a small team of 50. Now, Favor has over 350 employees and is still expanding quickly.

Favor stores all of their visual assets, including photos, videos and GIFs in Canto. It’s been critical for the growing company to have a DAM that makes their jobs easier and doesn’t require much maintenance or training.

“Canto does everything we need it to do easily and efficiently. It’s also intuitive to use; most people can just open it up and figure out how it works,” says Nicolai. 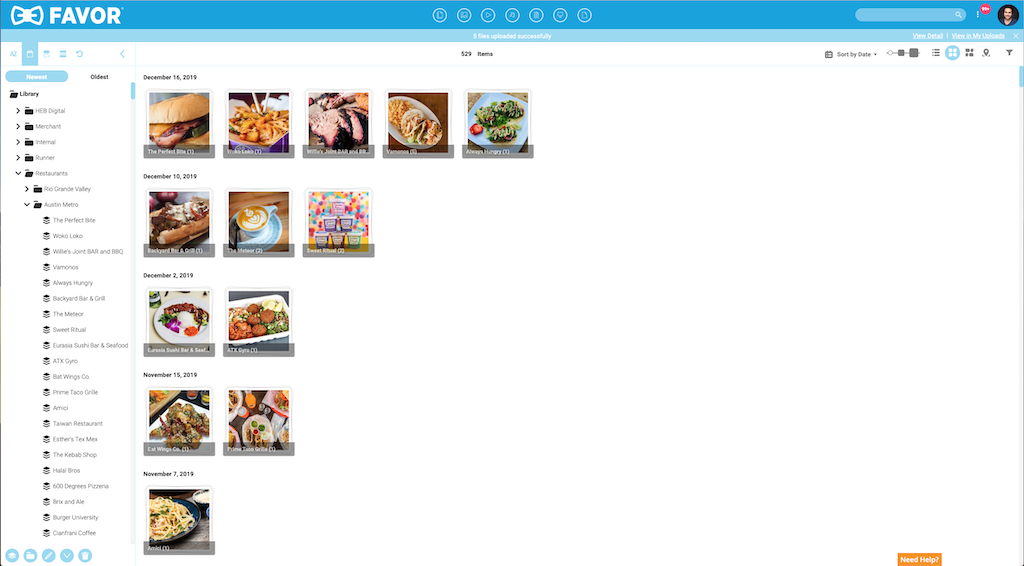 As a big fan of Canto’s customizable folder structure, Nicolai set up easy-to-navigate folders containing big-bucket items such as marketing campaigns, restaurant imagery and assets related to their Runners (their delivery team), which are then further divided into subfolders and albums that organize assets for specific campaigns, restaurants and individual Runners.

The team can easily access all visual assets in Canto, helping the team work quickly to match their fast-paced work environment. The self-serve nature of having an easy-to-use and centralized asset library means that no one is a bottleneck.

“Most team members just go into Canto and search for what they need. It’s only if they don’t see something that they’ll reach out to me,” says Nicolai.

The photography team uploads most of the assets into Canto. From there, the design, content, marketing and sales teams can self-serve.

“The design team will usually pull assets from Canto to create various materials, such as ads, emails, billboards, graphics, etc. for the marketing team. The content team also uses assets in Canto to add visuals in the app, and the sales team uses photos in Canto when they work with restaurant partners,” says Nicolai.

When the team has to share images with restaurant partners, they can do so within Canto – there’s no need to upload files to another application or platform for sharing.

“Whenever we we do a photoshoot at a restaurant, we’ll upload the photos into Canto. Then, we’ll create a collection link and send it to the restaurants,” says Nicolai. 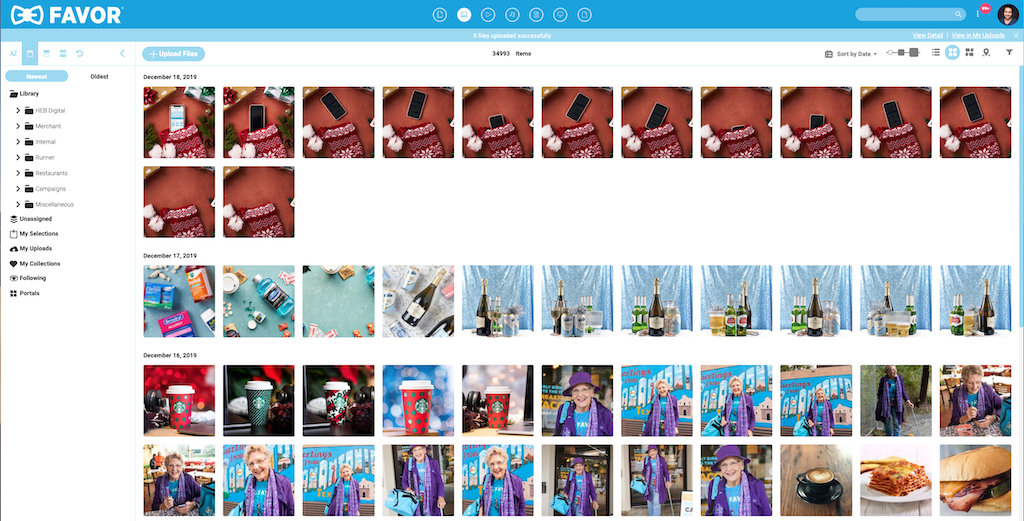 The team can also collaborate and help simplify each other’s work within Canto. For example, Nicolai helps out the social media team by curating suggestions for photos they can use.

“Our social media team will scroll through Canto to find photos they want to use. That’s where the image previews are really nice because they can quickly see what photos we have,” says Nicolai. “Since I’m taking a lot of the photos, I’ve created a ‘social’ tag. I tag all the photos that I think will do well on social so the team can filter using that tag.”

“I’ll usually give a new user a really basic three or four minute rundown of how the general folder structure and search function work. If they have any questions, they can reach out to me about how to use it, but most people can figure it out themselves,” says Nicolai.

Canto works smoothly and seamlessly. As we’ve grown over the past few years, we’ve had to replace a number of other software and services that were too slow. But Canto has never come up as one.

As Favor embarks on the exciting road ahead, the creative team is focused on delivering content at the volume and speed necessary to support the rest of the organization.

“The two teams that rely on us the most are the sales and marketing teams and they have a lot of strict deadlines and guidelines. It’s important that we’re putting out the content that they need at the speed that they need it,” says Nicolai. “The last thing we want is for our digital asset management to be a roadblock.”

With Canto helping to pave the way for agile, streamlined workflows, Favor’s content has become a special ingredient in the company’s success.

“Canto works smoothly and seamlessly and it’s never been an issue,” says Nicolai. “As we’ve grown over the past few years, we’ve had to replace a number of other software and services that were too slow. But Canto has never come up as one.”

Inspirato democratizes content with a central destination for media assets