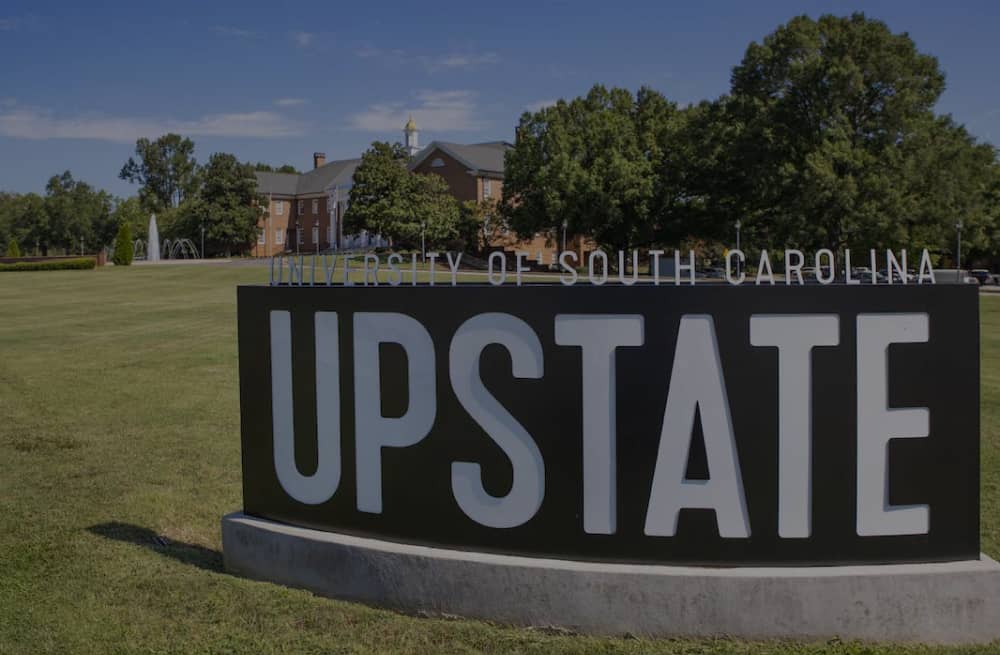 University of South Carolina (USC) Upstate is quickly rising to the top of its class, ranking as U.S. News and World Report’s top public university in the South. And we can see why: with its rigorous academics that prepare students for fulfilling careers, beautiful campus and Big South Conference athletics, the Spartan community has a lot to brag about!

The University Marketing & Communications (UMC) team aims to convey all of the university’s great qualities to prospective students, as well as cultivate Spartan culture and pride among current students and alumni. Jav Rivera, multimedia producer, and Les Duggins, photographer, work hand-in-hand to create visual content that tells USC Upstate’s unique story and sets the school apart from other institutions in the region.

The marketing & communications team gets into their creative groove and collaborates with departments across campus to tell the USC Upstate story with compelling content.

As part of the UMC team, Jav and Les collaborate with other departments on campus, such as graphics, admissions, student life and athletics to promote campus culture and reach out to prospective students.

Les captures shots that the school uses in everything from news articles, billboards, the university magazine, the website and social media. Meanwhile, Jav spearheads two visual storytelling initiatives – “Spartan Stories,” a series of videos featuring alumni, current students, faculty and staff telling their perspective on how USC Upstate has shaped their lives, and “Walks with Lucy,” a series following the chancellor as he walks his dog, Lucy, and chats with folks on campus.

These initiatives result in a ton of content that is immensely valuable, but only if the team can access what they need efficiently. The university was storing all of their content, including raw files, on a system of servers and hard drives, which made the simple task of finding an image a major pain point. The team was eager to find a faster and more intuitive solution that would allow them to spend more time working creatively than digging for files.

“When we got an image request, we would have to go through all the hard drives to find photos, and we couldn’t access the photos off campus. It was so time-consuming,” says Les.

The team chose Canto to store their digital asset library for its ease of use and price point that was accessible to a state university. “Once people saw how easy it was to use Canto, they were excited to get started,” says Jav.

We get so many image requests for the chancellor’s photograph, so Canto’s facial recognition saves us a lot of time searching.

The university stores all of their finished visual assets in Canto, including photography by Les, videos by Jav and artwork by the graphics department. Having a central location for all visual assets keeps the team focused and in sync.

“What I really like is that it’s mostly me and Les who upload into Canto. We don’t need to sort through all of the stuff that was stored in our server before – all the documents, Excel sheets from every department – to find what we need,” says Jav.

Jav and Les set up the folder structure in Canto to make their media library easy to navigate. They separated the library between photos and videos, and created folders for each media type that reflect the content and how it’s used.

This structure makes it super easy for team members to grab what they need. For example, the content manager knows exactly where Jav keeps videos for social media and can download it himself instead of asking Jav.

Even if team members don’t know where a certain asset lives, they have no problem finding it themselves with the search and filter functions. Les champions the importance of tagging within the team, making sure to tag each photo thoroughly with information such as the date of the shoot, the name of any buildings or classes and the names of any individuals in the shot so that the images are easier to find via search.

“The search tool is lovely. With the server, trying to find anything was an endless process; Canto’s search function makes it so easy,” says Jav.

One of Les’ favorite features? He loves that Canto’s facial recognition automatically tags the people he photographs and helps him find those photos later on.

“We get many requests for the chancellor’s photograph, so Canto’s facial recognition saves me a lot of time,” says Les. 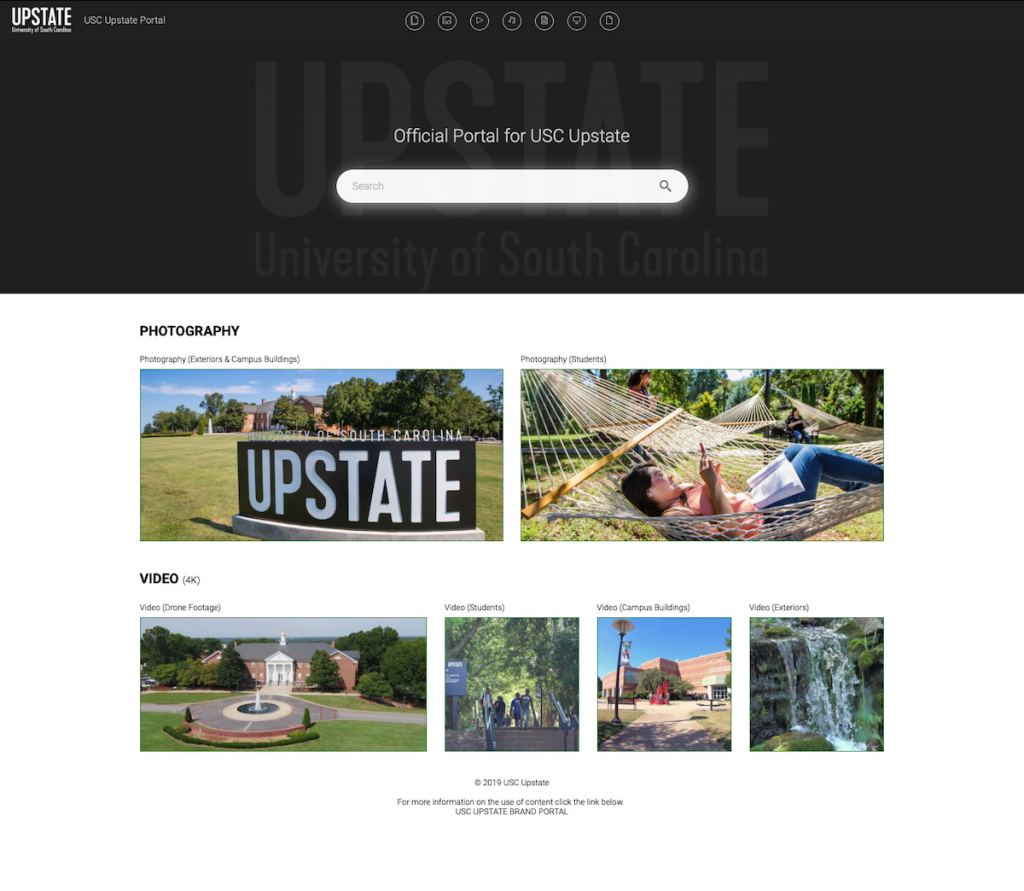 “Les used to run around campus with a USB drive to share the photos between departments. Now, he just shares them with a Canto link,” says Jav. “Since our athletics got accepted into the Big South Conference, there are new requirements for the photos that Les takes at sporting events – and now he’s taking way more photos. I don’t know how he would’ve shared all of these photos without Canto.”

The graphic design department can now self-serve and pull their own photos to use, instead of having to go back-and-forth with Les to find the right image.

“I noticed that a graphic designer had taken one of my photos to use in her work, and made it really pop by making it black and white. That’s the thing when you collaborate – other people see things differently. And she really made it work. I didn’t send her that photo; she pulled it from Canto herself,” says Les. “Now, I just tell the team to look in Canto when they need photos from a shoot. It’s a simple process.”

Canto has also made some unique collaborations possible on campus. A professor of graphic design runs a program where students create artwork for the school’s marketing as if they were a real graphic design agency. The UMC team uses Canto to share raw photography with the students, and the students use Canto to send back finished work.

Jav created a media portal with assets created specifically for USC Upstate’s media partners. This portal came in handy during the university’s recent Media Day, where the school hosts local news outlets on campus. Media Day was especially important this year because USC Upstate has made a number of recent changes as part of a rebrand, including new recreational areas to help students feel at home on campus.

Thanks to the Canto portal, media partners have quick access to a library of pre-approved content to use. 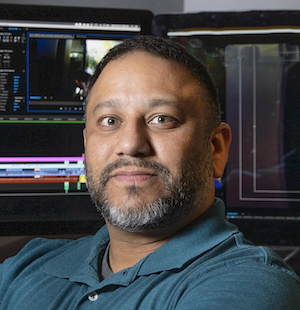 With Canto, we have a much easier way of sharing content between campus departments and even team members.

Results: Bringing a campus closer together

For the UMC team, success means expanding the vibrant USC Upstate community and fostering a culture that makes everyone feel at home on campus. Each piece of content they create that resonates with prospective students, the campus community and alumni helps them reach this goal.

“We want our students to feel at home here. Chancellor Kelly really advocates this idea that we should all – students, faculty, administrators, staff – take ownership of the campus,” says Jav.

Canto smooths out the friction points in their marketing operations so that the team can get into their creative groove and collaborate with departments across the school to tell the USC Upstate story with more compelling content.