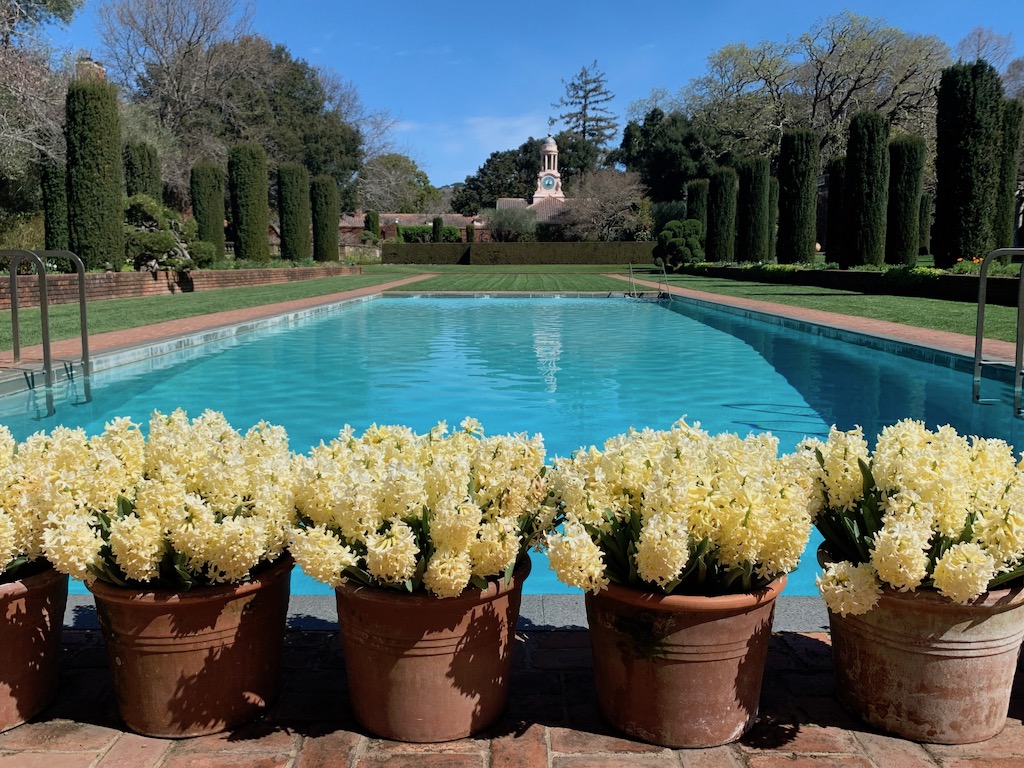 Few people can say they’ve worked in both music and medicine, or are a whiz at both marketing and photography. Meet John Williams, modern renaissance man and the Marketing Manager at Filoli Historic House & Garden.

Join us for a conversation about his fascinating career path and how he finds creativity in his work!

Fioli Historic House & Garden is a beautiful 16-acre estate in Woodside, CA that educates the public through exhibits, tours and events. The nonprofit uses Canto to manage their digital assets. 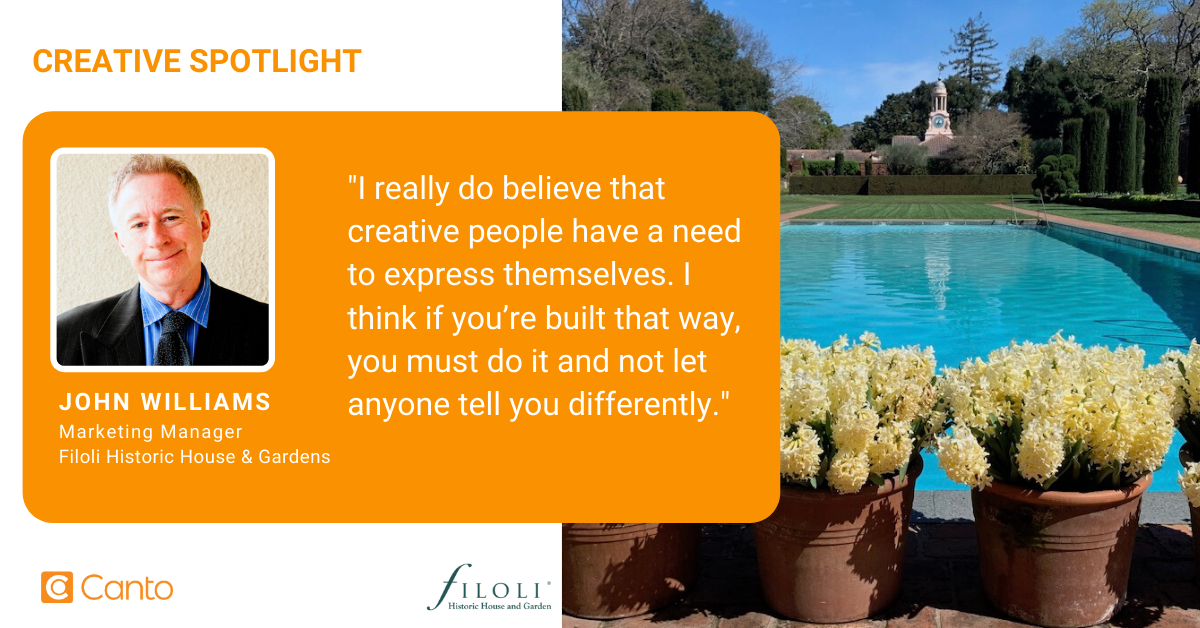 What do you do at Filoli?

In my current role as marketing manager at Filoli, I have a broad swath of responsibilities that include digital and print advertising, website management, partnership negotiations, media outreach and management, social media and working with outside photographers.

What were you doing before Filoli?

I started out and worked for nearly 10 years in the record industry for a small record label called Windham Hill Records. It was a home for artists that didn’t really fit into any particular genre, which was very important in a time when everybody was getting very formulaic. I was the Licensing Manager, so anybody who wanted to use our music in any type of production would come to me. I would do a lot of outreach to solicit the use of our music. That meant having relationships, initially with independent filmmakers and TV, to all of the Hollywood studio system. I’d regularly go down and meet with Paramount, Warner Brothers and Fox, etc, primarily dealing with music supervisors, directors and producers to get the music into film and TV as well as commercials.

After that, I went to America Online and I did content licensing inbound and licensed the assets, mostly graphics, but also photography. And then some dot coms and several years at Stanford Blood Center as the marketing manager, doing a lot of cool events. Then, I continued in the medical field at Sutter Health. Later, I worked at an art school and for KDFC Classical Public Radio. 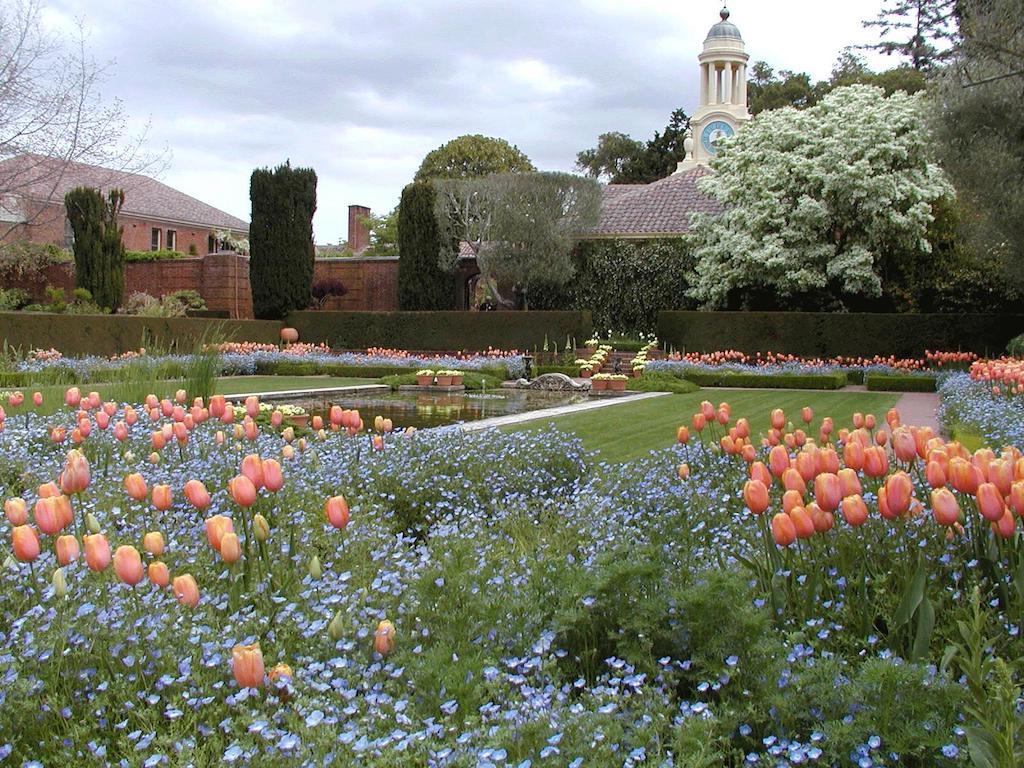 Wow, you’ve really had quite the breadth of experience! So I know you also love photography; do you consider it a professional interest or more of a personal passion?

It’s a bit of both. I use photography on the job quite often. I was semi-pro for a while, selling cards and doing a lot of event and concert photography. I was connected with a music organization where I was their in-house photographer. I also worked as a volunteer photographer for the United Nations Association Film Festival.

Now, I’m transitioning to fine art photography, more street style and documentary photography that I would like to sell one day.

Very cool! What are your favorite subjects to shoot?

I would say definitely portraits, but when you’re shooting other people’s images, you can’t really sell them. So I’m transitioning to what I call architectural elements. If I went in to, say, St. Mark’s Square in Venice or Trafalgar Square in London, I wouldn’t shoot the square necessarily. I’d zero in on details and create abstracts. That’s what I’m getting more interested in: abstract shapes, colors, patterns and textures.

How did you get started with photography?

I started on family vacations with my young kids. I wanted to chronicle that because you can’t go back. I knew of parents who didn’t do this and regretted it later on. So right from the get go, the minute they were born, I captured everything on camera or on video. We take regular vacations and we do all sorts of school stuff so I really got into travel photography.

What keeps you inspired on a day-to-day basis?

Without question, creativity. You can be creative with anything. Even in the business world, you can really use your creativity, especially in marketing.

When I was at Stanford Blood Center. Because of the nature of all these solid organ transplant units and cancer care that was coming online, they had a real need for blood products. And as the donor population was aging, you got fewer donors. During the recession, in 2009, I sat down and thought, how can I come up with a plan to do something really out of box with two goals: to increase blood donors, but perhaps just as importantly, to increase media attention. The media was tired of hearing about blood drives. So I devised something called “Giving Blood Works.” It was a deliberate play on words. We invited anybody that was unemployed who was eligible to donate blood. In return for that, they got to come to a special workshop with top-notch career counselors showing you how to use LinkedIn and other cutting-edge devices to find work. We also invited companies to come and recruit on the spot. We did about three years of these and got thousands of donors. That second goal was also achieved and we got TV, radio and print coverage and ended up in The Wall Street Journal as an innovative way to get Americans back to work.

You don’t necessarily have to go out behind the lens or draw or paint. You can be creative in other ways.

What advice do you have for aspiring creative professionals?

Do not get deterred and find a way to make it work. You’ve gotta be true to yourself. I really feel that. I really do believe that creative people have a need to express themselves. I think if you’re built that way, you must do it and not let anyone tell you differently. Have the confidence to do it.

Omnichannel marketing: What it is and how it works

Companies are working diligently to ensure their campaigns reach different generations. Not all of them succeed. Here’s a guide to help market to Gen Y.

With over 120 sessions hosted by world-class marketers, which sessions at Content Marketing World 2019 should you attend? Here are 5 talks you can't miss!