Why Swiss-Ski uses Canto for its videos

Since its establishment in 1904, Swiss-Ski has been one of Switzerland’s most important and most successful sports associations. It brings together eleven sports under its roof: Alpine skiing, cross-country skiing, Nordic combined, ski jumping, biathlon, snowboarding, ski cross, free ski, mogul skiing, aerials and telemark skiing. Swiss-Ski promotes top-class sports and is oriented toward the world’s best sports nations. It attaches importance to popular sports, enables children and youth access to snow sports and contributes to public health. 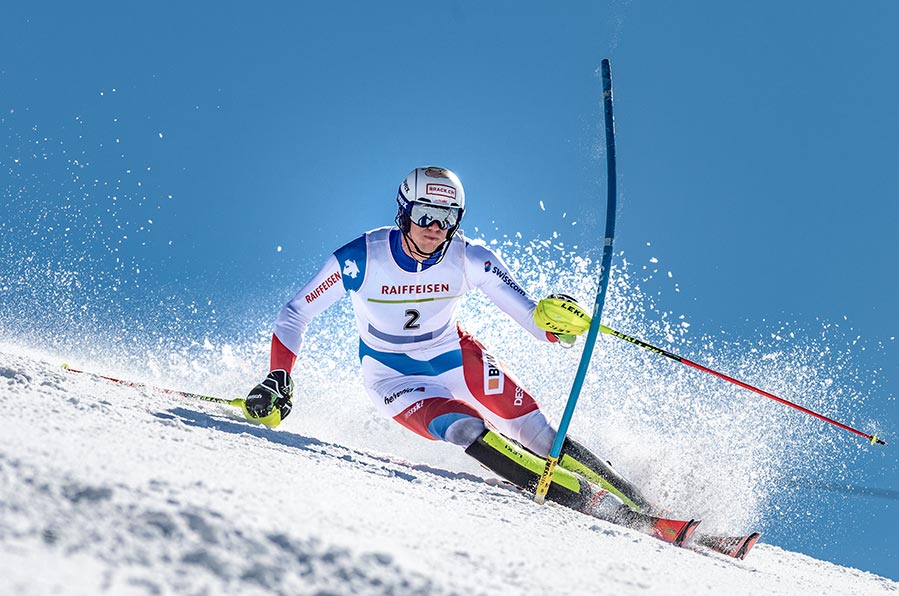 No two companies are alike. That’s why we talk with our customers about how they use Canto. The Swiss Ski Association Swiss-Ski is the umbrella of organization of Swiss Snow Sports. We spoke with Simon Linder about his job as a digital content manager.

What is your job at Swiss-Ski?

So, what does that entail in your everyday work?

My job is to advise and provide input. We have a major moving image concept, where the purpose is to produce videos for social media. I coordinate and plan this specifically. The recordings come from coordinators who are out in the field with the teams or from agencies. My task is to brief the agency and/or our colleagues from the communication team on site prior to production of these recordings. I also approve the production and decide whether it meets my expectations or those of the association. Then, I release this content for publications – I pass on the download link to the released material to my staff in the communications department. They then create a social media post from this content.

That means you’ve always got an overview of the content and media files?

Precisely, I have the overview and am also the liaison with our main agency. We work together with multiple agencies, but we try to handle 60-70 percent of the productions with one agency to build up know-how, and of course to establish trust vis-a-vis the athletes.

When did you first come into contact with the topic of DAM?

I’m already familiar with digital asset management from my many years of experience in this field. With my previous employer, there was the problem of having to collect and redistribute the brand content in order to distribute entire video campaigns to the various regions.

It became evident in our workshops that what we’re planning can’t be done with a simple file sharing solution like Dropbox. We need a professional system that meets our needs. Then we came across Canto.

And at what point was the decision made at Swiss-Ski to introduce Canto?

Precisely at the point when we developed our new moving image concept. Ultimately, as part of that, we came to an agreement with our commercial partners, i.e. our sponsors, to act as a kind of agency for their moving image content. As such, Swiss-Ski became a kind of small media company that offers services. As a media company, it was then clear from the get-go that for our strategy, that we also needed digital asset management to be able to offer that at all.

So, Swiss-Ski’s goal was to find a system which met these new workflow demands?

Right. A major point here was the question as to how we could move video material produced all around the world to a central, location-independent media platform as quickly as possible so that an agency could produce a clip out of the material.

During the project, we always expressed it like this: If a physical therapist records a video with his mobile during the ski summer training in Argentina, that has to be able to be produced in Switzerland quickly and easily. And so, how do we bring ‘home’ this video without using WhatsApp, etc? What we looked for was a central platform that works with keywords and permissions in order upload, process – and when necessary – redistribute videos.

Where did the initiative come from at your company?

We had various workshops with agencies in which it gradually become evident: What we’re planning can’t be done with a simple Dropbox. That lacks tagging functions and permissions. We need a professional system that meets our needs. Thus, we came across Canto.

So, what kind of media content are we actually talking about here? Is it exclusively videos?

The moving image concept was the impetus for this project. But it was also clear from the start that over the course of the year, photos and presentations would also be organized with Canto and in the process our old system, which we’re currently still using, would be replaced. Then, official media images released for media professionals will also be made available using Canto.

Yes, around 75 percent of our media library is made up of the multiple thousands of videos. We do have some photos, but that’s actually the next step in the project.

How did the migration of your new DAM project go with Canto?

Since we mainly purchased Canto to provide new services, there was no system yet for video content. As such, there wasn’t actually a migration in that sense. Finished videos which were supplied by agencies were on an internal server in the association environment. Files were usually transferred via WeTransfer or a similar auxiliary solution. The material which was delivered to us was the biggest challenge. Usually it first went through WhatsApp and then on request via Dropbox or a similar program. As mentioned, it was already clear for our moving image concept that we had to invest in a system here.

Which of your departments and colleagues are connected to Canto?

Here we’ve got the communication department and our central agency, which is also connected to the system, which work operationally with Canto. The agency gets the video material from Canto, then does an edit and loads the material back into the system.

How many people work in the communication department at Swiss-Ski?

It varies since our business is strongly based on the snow sports season. Over the summer months, we have up to seven regular staff members. In winter, there may be up to 10 employees at work here, and accordingly come into contact with Canto – plus the agency’s employees.

Of those, there are four of us users who intensively work with Canto. Here at Swiss-Ski there’s me and a colleague and then two more users at the agency. The other employees primarily use Canto via upload links and download collections.

And who’s responsible there for the system, the metadata quality?

Myself and my counterpart at the agency are responsible for the metadata concept. We initially let the structure of our media files in Canto grow organically to get an idea of how much order we need and what our needs are. Basically, we’re still developing the system. At Swiss-Ski, we generally use the months from May on to clean up and optimize. We’re starting in this phase now. By the end of August, beginning of September, everything has to be ready again for us to start into the new season in October.

Were you able to save time with Canto and how does that reflect in your daily work?

With regard to our moving image concept, Canto is a completely new working process which we didn’t really have before here. So, you can’t really compare it. You can say: Canto was what made our video offering as a service for our partners possible at all.

But Canto saves us time in other places: Before, I always had to create WeTransfer links. There’s always a waiting period until the file has been uploaded. That of course immediately gets eliminated. I simply copy the share link and forward it via e-mail or similar. As soon as we’re also managing our images and presentations with Canto in our next project phase, I expect even greater time savings.

What is your favorite feature?

We use the share link very often. It works really well and easily for redistributing videos. For our review process with the agency as well. What’s really handy here is that the link to the asset stays the same, even if a new version is uploaded to Canto here.

The upload link was one of the killer criteria for us. The fact that you can provide a link to other users without a password, a login, without registration, using which they can upload files, that’s one of the absolute top features in my view.

How much time do you spend on Canto each day?

On a day like today, where I’m working very intensively with uploads, new projects and reviews, Canto is one of my most important browser windows, which is always open. Then it’s sometimes surely four hours. Then there are also days where I quickly download a file from Canto and then upload it to Facebook. At times like that, my access to Canto is limited to a couple minutes. So, let’s say: Something between five minutes to five hours.

Thank you very much for the interview.